There’s nothing wrong with having a backyard living area built over the years (as opposed to all at once). In fact, phasing is one of the best ways to incorporate multiple outdoor living zones into one complete space.

But that’s all assuming it’s completed in a way that looks like all of the spaces were always meant to be one. When it’s not, it can negatively impact the entire look and functionality of the area.

For this particular landscaping project in Strasburg, PA, there were multiple existing spaces that were built and added over the years by different contractors—and every single one looked like it was built as a separate project. The individual areas lacked unification and it was quite obvious that this outdoor living area was designed and developed over time. That’s why the family was looking to redo all of the individual zones to make it look and function as one intentional space.

Overall, many concerns called for a total renovation, which included upgrades as well as replacements to the existing backyard, with some areas, such as the pool, being enlarged.

A Lack of Functionality

Besides the fact the backyard looked disjointed, it also functioned poorly. In particular, the lawn area adjacent to the patio and pool sloped enough that it wasn’t functional for yard games that the family would have liked to play.

In fact, it was space that really wasn’t used at all, which was frustrating. The homeowners entertained a lot but lacked overflow space for the extra guests who didn’t fit on the patio.

The homeowners, who regularly enjoyed ballroom dancing as part of their entertainment, were also frustrated that their existing patio had been built from irregular flagstone with mortared joints that were in disrepair. Though they would have liked to be able to dance outside, the uneven surface made it cumbersome and even dangerous to do so.

Renovations and Additions to Landscaping in Strasburg, PA

This backyard living area included a series of renovations and additions that completely transformed this backyard.

Let’s take a look at each of them.

The patio area right off of the home was completely redesigned with a new layout that paid closer attention to how the property was graded and how adjoining areas could offer overflow. The patio was reconstructed in a Techo-Bloc paver called Blu, which was smooth and therefore ideal to the ballroom dancing the homeowners enjoyed for fun.

The project also included the addition of an outdoor kitchen, which was also important to the family given the fact that they liked to frequently entertain and this often included cooking meals. Interaction with guests while cooking played a big part in their entertaining style. The galley style kitchen, with its open feel, helped to achieve this. The layout also takes into account the fact the chef and guests can easily see and interact with people in other sections of the backyard (including the pool, pavilion, and putting green).

In addition to the built-in grill, the outdoor kitchen also has a special area for the homeowners’ Green Egg smoker, as well as a power burner which can be used to boil large pots of corn or seafood.

Directly across from the cooking area is a bar with seating where guests can interact with the chef. The bar also incorporates a sink, two refrigerators, an ice maker, and it has a spot for an umbrella if shade is needed.

The outdoor kitchen also has a small pergola which casts some additional shade and created an aesthetically beautiful focal point. It also created a convenient anchor point for hanging string lights that cast additional light onto the grilling side of the outdoor kitchen in the evening hours.

Adjoining the patio is a new pavilion featuring a more formal dining “room” where family and friends can share a meal. The table is also great for board or card games. The pavilion also features a lounge area near the fireplace where guests can enjoy great conversation, watch the game, or enjoy an outdoor movie. The television situated above the cozy outdoor fireplace can conveniently also be viewed from the kitchen’s bar area.

A lot of time was spent on the layout of the pavilion area, including the furniture location. A key element of this design was providing “connectivity,” which the previous backyard lacked. Though there are multiple areas, it was important to the homeowners that each of the outdoor rooms connected when they entertained large groups. Such purposeful connectivity unifies events creating the feeling of socializing together despite enjoying different activities.

The pool area also required renovations, including upgrades that would make the space more usable. During the design phase, we spent quite a bit of time talking about how the pool patio functioned and it was clear the homeowners felt it was too small for their larger parties. 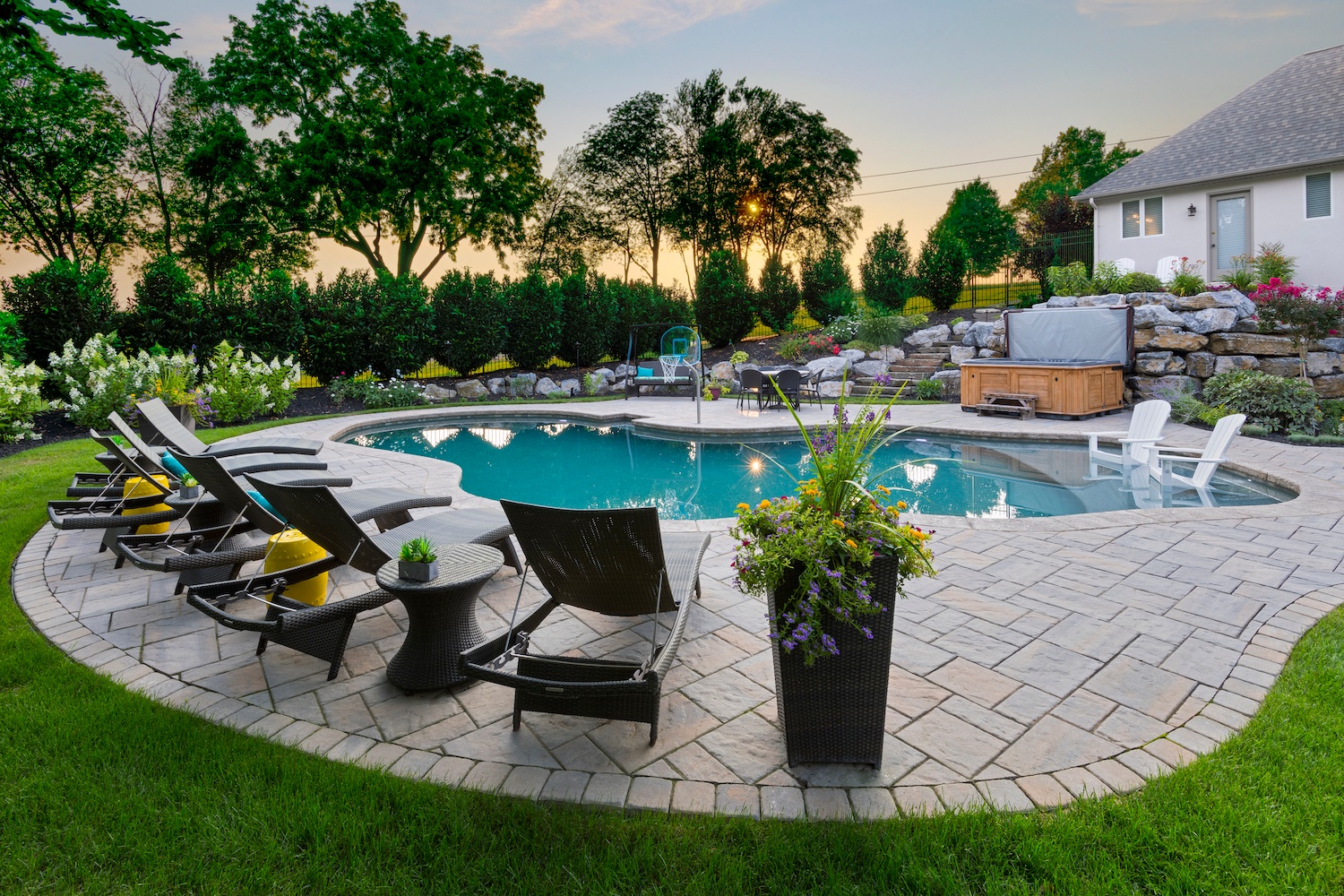 The existing pool patio was removed and expanded in the new design. In addition, the pool itself was expanded and now features a sun shelf.

The homeowners also wanted to add a hot tub to the pool patio, so we located at in a way that the hot tub would feel private and “tucked in” but allow those using it to still feel part of the action going on nearby. Similarly, the entire pool area feels connected to the nearby pavilion so that those seated in the shade can still view the pool with ease.

An additional exciting amenity added to this project was a putting green, which the homeowners viewed as yet another entertainment opportunity during get-togethers.

The putting green was made possible thanks to regrading the formerly sloping yard. This also helped with the connectivity between all of the spaces, as they are all easily viewed and feel much more like “one” than before.

Of course, a project isn’t fully complete without many little details that bring it all together. In this case, there were several additional features that helped finish this new/renovated backyard.

Landscape lighting incorporated throughout each of the different zones was key to making this backyard usable both day and night.

On top of functional purpose and improved safety, the incorporation of professional lighting also makes the backyard aesthetically beautiful after the sun goes down.

The project also featured quite a bit of landscaping so an irrigation system was installed to help keep all of the plantings looking their best. This particular client was interested in gardening and had many great ideas in terms of color and varieties of plants that were preferred.

Several planting container locations were also incorporated into the design as it was important that they serve as mini focal points. The homeowner seasonally changes out the color in these containers—a hobby that she enjoys.

The addition of walkways to connect the spaces was an important element of the hardscaping in the new backyard. By adding these connective walkways and steps, guests easily circulate from one outdoor “room” to the next. 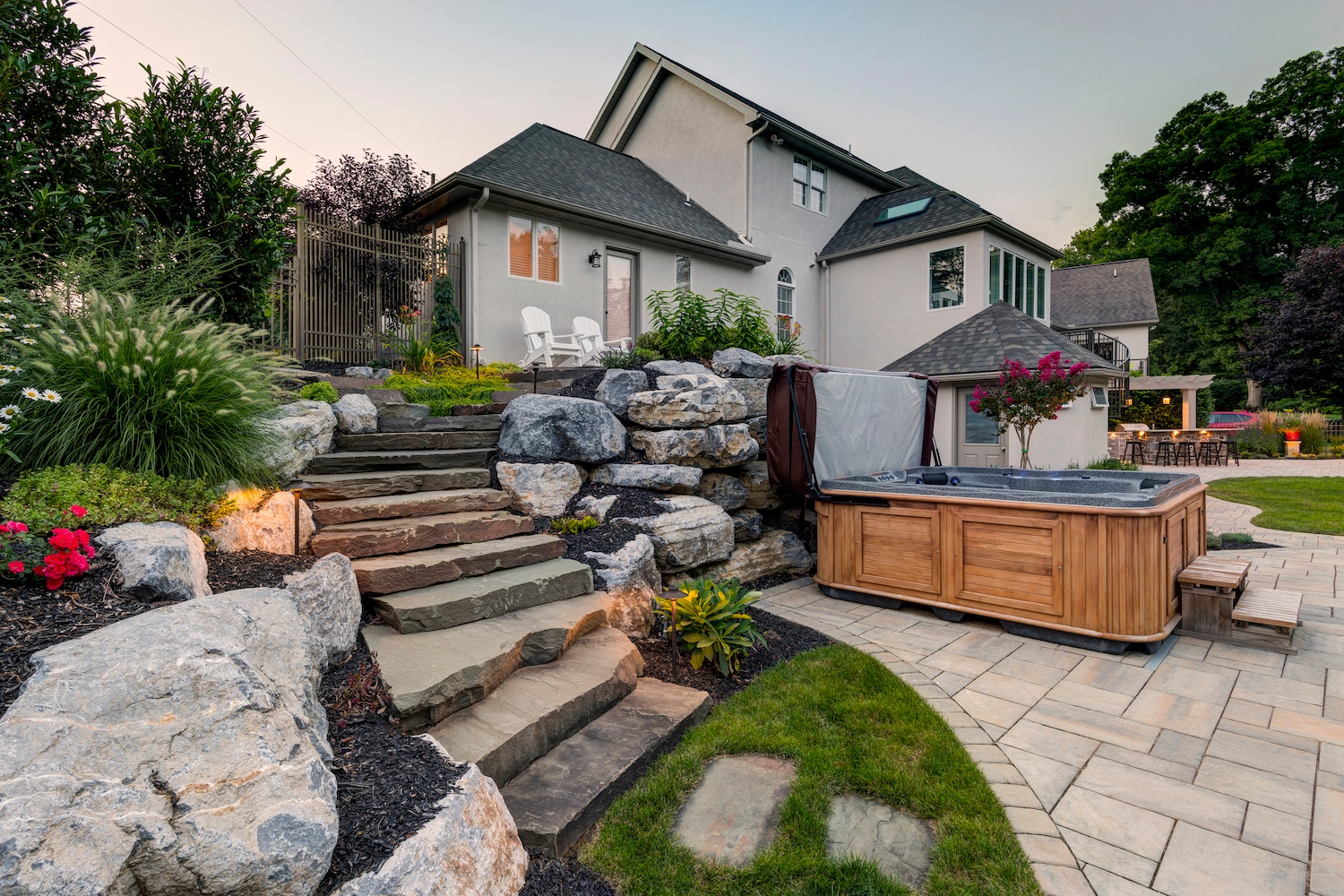 We also added a new walkway in the front of the home.

A spiral staircase was added connecting a downsized deck to the renovated patio area.

And because there was a lack of storage possibilities, we incorporated a storage room underneath of that upper-level deck (adjacent to the new staircase).

The Power of Ideas

Bringing this entire project together in a way that made it truly usable for this family involved working together. While we are always encouraging homeowners to share their ideas, some want more involvement in the process than others.

From day one, these particular clients invested quite a bit of time in researching ideas and inspiration.

The process included quite a bit of time “play acting on paper,” meaning that we envisioned different scenarios in how they would be using the backyard—and we spent a lot of time thinking about how those different entertaining scenarios would work with different layouts.

Having lived with a disjointed space for so long, it was vitally important to these homeowners that their new backyard felt truly unified, particularly with how often they liked to entertain guests. We achieved that by working together on a finished project that would fully meet all of their needs.

The homeowners say they couldn’t be happier with the result. Now, no matter where their guests are within the backyard, they still feel part of the same group. This was exactly the goal—to be able to entertain in a way that everyone felt included.

Whether a brand-new project or a renovation, our goal is always to work with the specific wants and needs. While we’ll offer ideas and solutions we think will make the space even better, the main purpose is always to make the space work the way you want it to so that you can enjoy it to the fullest.

If you’d like to start a conversation about how you can bring your outdoor dreams to life at your York, Reading, Lancaster, Lebanon, Strasburg, or Hershey, PA home, contact us for a free consultation or give us a call at (717) 276-9447.

Mary Hatch Dresser is a Registered Landscape Architect with a Bachelor’s degree in Landscape Architecture from the University of Georgia School of Environmental Design. Mary has designed landscapes for 32 years and joined ETW exclusively in 2009. Mary is a member of the American Society of Landscape Architects (ASLA); and also serves on the Shade Tree Committee in Strasburg Borough where she resides. Mary prides herself in carefully listening to her clients to professionally meld their ideas and personal criteria with sound, experienced design practice.

Patio and Deck Combinations: Which to Do First, Ideas, and Pro Design & Construction Tips

Patio and deck combinations are a great way to maximize the use of your living area, but sometimes the task can be overwhelming. Follow ...
Continue Reading

Check out this beautiful landscape project where a sloped backyard turned into an amazing under-deck flagstone patio with a fire pit, ...
Continue Reading

Check out this beautiful landscape project in Reading, PA. A project that started as a design project to solve errors turned into a ...
Continue Reading

We would love to hear from you.